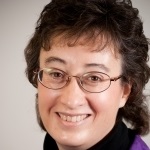 Margaret currently works part-time in an Administrative Assistant role for Cornerstone fulfilling general office duties on a daily basis. She joined the team in 1991 when she worked as a paraplanner and office manager until 2003 when her son was born three months prematurely. She graduated from Lincoln Christian College in Lincoln, IL in 1989 with a Bachelor's Degree in Secretarial Science. She is married to Allan, who is a mechanical engineer at Delphi. Her son Brandon, despite his early birth, is very healthy, does well in school, loves participating in Karate and enjoys reading and music. The whole family is very involved at Anchor Christian Church, where Allan is an elder and Margaret plays keyboard. Margaret enjoys watching NBA games, taking walks, and spending time with her family. Her favorite scripture is Isaiah 40:28-29, which says, "Do you not know? Have you not heard? The Lord is the everlasting God, the Creator of the ends of the earth. He will not grow tired or weary. And His understanding, no one can fathom. He gives strength to the weary and increases the power of the weak."